May contain traces of nuts

I am being a very bad blogger these days.  In my defense, I was overseas for two weeks.  You can read all about that here.

But recently I have made a couple of cakes.

A marscapone meringue layer cake for a friend who was leaving work: 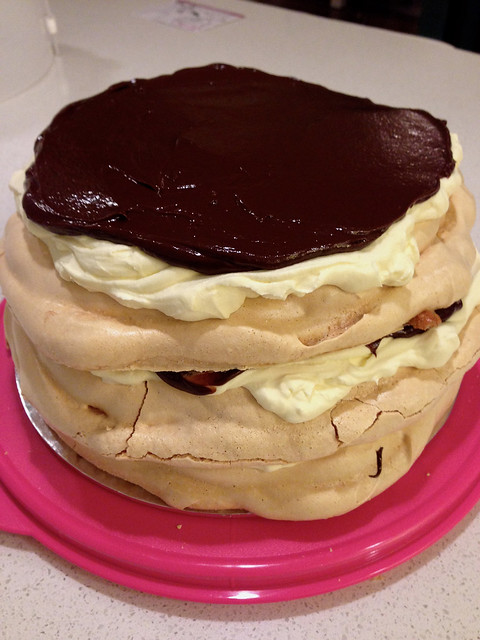 And some neapolitan cupcakes just because: 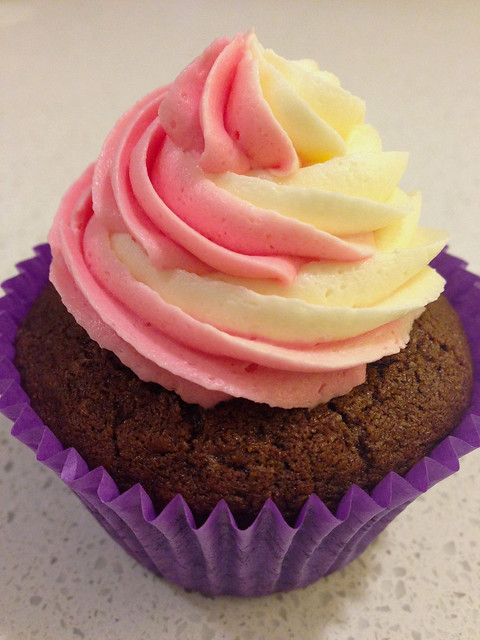 Advertisement
adventures, all about me, baking, holidays

Wow, I didn’t realise it’s been so long since I wrote anything here!

In case you were wondering, Teddy survived his weekend with my parents so that’s all good.  We had a lovely time in Lakes Entrance.  We specifically went to see the Buchan Caves, and they were quite amazing.

If you click on the photo you’ll be taken to my FlickR photostream where you can see more photos.

adventures, all about me

Here’s a photo from our trip to Papua New Guinea last year – Ponam Island in the Bismarck Sea.  There was a storm coming.

I still haven’t decided what else to write about.

adventures, blogging just for the sake of it, photos, travel

(so not a) Daily Photo

Remember a few weeks ago when I mentioned that I got my long-awaited-for KitchenAid Artisan Mixer?  Well, I thought the four-day Easter weekend would be the perfect opportunity to give it a good road test.  So I made a six-layer neapolitan cake.  And oh boy was it good.

I took my inspiration from Sweetapolita‘s Neapolitan 5-Layer Birthday Cake, and tweaked the design ever so slightly.  I made mine six layers (well, why wouldn’t you?) and did vanilla frosting instead of strawberry.  That was just too much pink for me.

I made a standard chocolate cake, an angel food cake, and then discovered I didn’t know how to make a strawberry cake.  So I found Rosie’s Stawberry Layer Cake and used that recipe.  Mine turned out not quite as pink as hers, but it’s definitely strawberry flavoured which is the most important thing.

And then the frosting.  Sweet baby cheeses, who knew it could be so hard?  I decided to make Swiss Meringue Buttercream ( I blame Rosie – I was using her cake recipe and it just seemed to make sense to use her frosting recipe too).  So I measured out the 4 million eggwhites and 35 cups of sugar, chopped the 18 kilos of butter, and began.  Getting the sugar to dissolve in the heated eggwhites without cooking them was the easy part.  When I put the bowl in the mixer and started whipping the meringue, I very quickly realised that actually, my bowl is too small and I was in danger of there being a river of meringue running through my kitchen.  No problem, I split the mix into two and kept going.

The first batch turned out perfectly.  I filled my cake layers with it and it looked like this:

Which as far as I’m concerned was a good start. Then I tried to whip up the second batch of buttercream. I tried for three days straight. Eventually, I gave up and tipped it out. All those egg whites! All that sugar and butter! But it was beyond saving.

Since I’d used almost all my available eggs and certainly wasn’t going back to the shop for more, I had to use a different frosting for the outside of the cake. So I made this recipe I found on Tasty Kitchen, and it’s strange because it has flour in it but goddamn it’s good! It is known as That’s The Best Frosting I’ve Ever Had. And it is awesome.

And then when we finally cut into it last night it looked like this:

And the world rejoiced at the gloriousness of it all. As did I.

I just had the most surreal shopping experience, and I wasn’t even buying anything for myself.

The boy’s sister is getting married in January.  His dad needed to get a new suit for the wedding.  He is a farmer, and the last suit he bought was probably 30 years ago (according to the boy’s mother).  So it was agreed that the boy’s parents would come to our place today, and we would take them shopping in the city for a new suit.

They arrived, and it was apparent from the moment they arrived that the boy’s father was not happy about having to go shopping.  But we all got in our car and drove into the city.  We parked just behind David Jones, which is a large department store in Melbourne, and trotted up to the second floor to men’s suits.

And there the fun began.  The first jacket we looked at was “no good”.  Neither was the second.  The third, “I’m not paying that much money for a suit!”. (yes it was expensive, but it was a damn nice suit).  After doing a lap of the floor, with the boy’s father becoming more and more mulish and his mother getting more and more frustrated, I decided it was time to take matters into my own hands.  The boy had already threatened to get in the car and leave everyone behind.  It wasn’t going well.

I went over and spoke to the sales assistant, who was a very nice man, and closer to the boy’s father’s age than my own.  I told him we had to get a suit for a wedding, that the person in question was being difficult, and could he please help us.  With great confidence he said, “leave it with me”.  He is my new hero.  20 minutes later the boy’s father had tried on three suits, chosen one, and was getting the trousers measured for taking up the hem.  They had even chosen a shirt and tie to go with it.

The boy’s father complained all the way home, but he has a very nice suit for the wedding.  He even paid more than $100.00 for it.  Now all he needs are shoes.  I was told not to even mention those today. 🙂

It was a weird experience.  I’ve never actually seen a grown man of 62 behave in such a petulant manner.  However, I did know that the boy’s father might throw a temper tantrum in front of his wife, his son and me, but he wouldn’t do it in front of a stranger.  Which is why I dragged in the salesman.

Thank goodness for all those years of psychology training in how to deal with difficult and stressful situations, and dealing with people behaving badly.

Who’s Who in the Zoo

About three Sundays ago, the boy and I visited the Werribee Open Range Zoo.  We took part in the behind-the-scenes lion feeding activity, which was so much fun and very interesting.

I’m pretty sure Teddy thinks he is a lion. Which is good because he is so fluffy he will have to get a lion cut this summer.

We also did a safari to see the rest of the animals.

We saw other animals too so if you are interested just click on any of the above photos and you can see them all on FlickR.

It was a great day out and despite the weather forecast being for rain, we had blue skies and sunshine the whole day. Magnificent.

The last few days in Melbourne have been absolutely magnificent. 20degC every day, blue skies, plenty of sunshine.  Our ornamental pear trees are getting over excited and have started flowering.  Of course the weekend forecasts rain and much colder temperatures.

We had a lovely time visiting Lake Eyre and a few other places last week, you can check out my holiday blog to see all the pictures.

adventures, all about me, holidays

And why wouldn’t you go to the beach in the middle of winter?

That’s just how we roll, people.

Saturday we decided to go for a drive to Ocean Grove, which is about 90 minutes from Melbourne.  Once we got there, we decided to keep going, all the way along the Great Ocean Road to Apollo Bay.

We did stop a few times along the way, and for the first time in my life I visited Bells Beach, which is famous for hosting a leg of the world surfing championships.

As you can probably tell, the weather wasn’t the best. But that didn’t stop this surfer!

Anyway, we had a great day.  The Great Ocean Road is stunning and if you visited me I would take you there, instead of Wodonga.

In December 2010 we travelled to Indonesia to climb some volcanoes.  What someone neglected to tell me was that Mt Bromo, where we were going, had been erupting for days, even weeks, before we arrived.

I was less than impressed but on the positive side, I didn’t have to hike up the side of the volcano because no-one was allowed that close to it.

Last weekend the boy and I decided to visit the Aquarium here in Melbourne.  We’ve never been there before and we had a great time!  The best exhibit was the Antarctic Penguins.

This is a King Penguin, the second largest breed of penguin in the world.

Sorry about the shadows, I didn’t take my camera so I took this with the iPhone.

Home for the holidays

Or more specifically, home from my holiday.  We arrived yesterday morning after a murderous overnight flight from Denpasar and promptly fell into bed for five hours.

If you want to see all the pictures and read all the stories, you can do that here.

Wow, it’s been a while since I updated here. I think I was too caught up in the AFL finals, which resulted in my team – Collingwood – winning their first premiership in twenty years. It was magnificent.

This weekend was flat out. Friday night I had dinner with friends at Vue de Monde – actually Cafe Vue – because they have a cocktail night where uber-chef Shannon Bennett invents five cocktails and then five tasty plates of food to accompany them. Totally delicious. Sorry, no photos, didn’t even think of it. I will make the ultimate sacrifice and go back again armed with my camera.

Saturday was Grand Final day, so my dad came over to watch the game and there was much cheering and yelling. It was an amazing game and an even more amazing win. I have already watched the replay once, and I plan to do that a few more times.

Saturday night a couple of friends came over for dinner, which was lovely. We ate and drank and talked lots; the perfect way to spend an evening.

Sunday the boy and I decided to go for a drive, we went to Hanging Rock as neither of us had been there before. It was just gorgeous but I must be getting old because I forgot to take my camera with me again.

Here’s a photo of a golden pheasant to make up for it.

Jeremy Clarkson uses the word “epic” a lot, mostly to describe cars that he likes very much.  Clearly he has never been to Milford Sound in New Zealand.

We arrived home Saturday night, after leaving Moscow at lunchtime on Friday.  No wonder I’m still jetlagged.  But damn it’s nice to be home.  AND the house was in good shape and Huffle was happy.  Uncle Heath was a big hit, it seems.

I’m busy working on the photos and blog posts for the holiday, but here’s a random arty shot for you in the meantime.