May contain traces of nuts

Comments Off on Rambo Posted by Tracey on February 21, 2018

No, not the movie. Did I mention we got a dog? 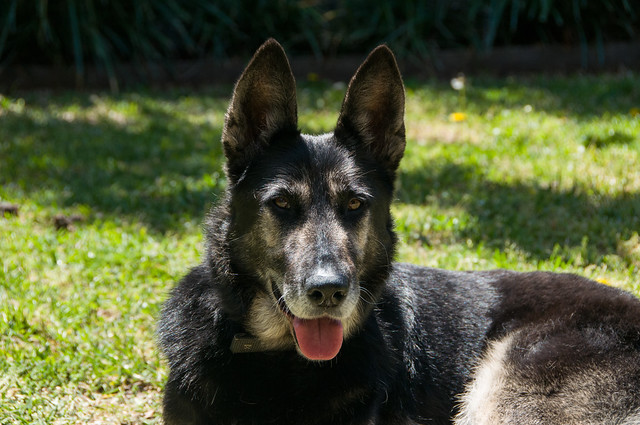 He is 12 years old, a German Shepherd, and just about the most lovely dog you could ever imagine.

This weekend is a long one in Melbourne.  The boy and I are off to the beach for the weekend.

My parents have offered to look after Teddy.  Which is terribly brave of them, considering that when we went to Papua New Guinea in November last year they were looking after both Huffle and Teddy, and Huffle sadly died.  It was totally not their fault.  But seven years previously, as the boy and I were about to head off to Queensland for a holiday… my rottie Max was staying with mum and dad.  The day before we got on the plane, I got a phone call to say Max had died.  Also totally not their fault.

My parents do not have good history in pet-sitting.  And yet they still offer.  I think they are really brave.

It will be different this time.  Instead of Teddy going to their house, they are coming to stay at our house.  It will be totally different.

all about me, Animals

Can you handle the cute?

This weekend, we decided to avoid thinking about the fact it is going to be another four weeks before the renovations are finished, by going over to Adelaide to visit the zoo and see the pandas.

Pandas are stupidly cute, and everyone who saw them was going beserk over how adorable they are.

You can make up your own mind.

For some reason, a lot of people end up here after searching for “polar bears”.  I didn’t think I had posted that many pictures of polar bears on this blog.  However, to keep these mysterious polar bear fans happy, here is a picture of polar bears.  A mother and her two babies.

No, it does not get much cuter than this.

I know, it’s been ages. My mind is blank.

Say hello to the cows.

Animals, blogging just for the sake of it

Who’s Who in the Zoo

About three Sundays ago, the boy and I visited the Werribee Open Range Zoo.  We took part in the behind-the-scenes lion feeding activity, which was so much fun and very interesting.

I’m pretty sure Teddy thinks he is a lion. Which is good because he is so fluffy he will have to get a lion cut this summer.

We also did a safari to see the rest of the animals.

We saw other animals too so if you are interested just click on any of the above photos and you can see them all on FlickR.

It was a great day out and despite the weather forecast being for rain, we had blue skies and sunshine the whole day. Magnificent.

All the news that’s fit to print

There hasn’t been that much news around here lately.  Teddy is here, and being cute, and Huffle is still not impressed.  I’m off to the vet today to buy a Feliway diffuser, surely that will help.  I’ve had most of this week off work, which is lovely.  Last night I went to the Australian Open and saw a couple of great matches.  Kim Clijsters demolished Dinara Safina in a very short amount of time, then Lleyton Hewitt and David Nalbandian played an epic match that lasted nearly five hours.  It’s just a shame Lleyton lost.

The boy and I are house hunting this year.  We need more room so we have to move.  We’ve already been to see a couple of houses and neither was quite right.  But we plan to buy a new place some time very soon!  I’m not looking forward to the actual move but it will be so nice to have a bit more room.  Our kitchen is too small, my computer sits on the dining table because there isn’t enough room for a second desk, the boy wants a room where he can build train layouts… it’s all good.

Meanwhile, since I really don’t have anything terribly exciting to tell you, here’s another photo of little Teddy to make you go AWWWWWWW. I know it’s a bit blurry, but I think it’s adorable.

Animals, blogging just for the sake of it, day off, house, Teddy

Last weekend the boy and I decided to visit the Aquarium here in Melbourne.  We’ve never been there before and we had a great time!  The best exhibit was the Antarctic Penguins.

This is a King Penguin, the second largest breed of penguin in the world.

Sorry about the shadows, I didn’t take my camera so I took this with the iPhone.

This is one of my favourite photos.  Taken on the tundra near Churchill, Manitoba, Canada, in October 2008.  I can’t believe it’s been so long already since we did that big USA/Canada trip.

I hope everyone had a good new year!

all about me, Animals, blogging just for the sake of it, photos, polar bears

Back to the animals at the zoo for a bit. The lion photos have a slightly odd blurry edge to them, mostly because I was behind a very large mesh fence and it was extremely hard to shoot through. I did my best.

They are such majestic creatures, even in a zoo.

These are the last two bears left at the zoo; I don’t think Melbourne plans to get any more bears because they really don’t have the room. These two don’t have the biggest enclosure so it’s just as well.

And finally, JoJo the gorilla, who loves people and come charging up to the glass to visit when you arrive. Her keeper told me she will also read very earnestly if you hold a page up to the glass for her.

Wow, it’s been a while since I updated here. I think I was too caught up in the AFL finals, which resulted in my team – Collingwood – winning their first premiership in twenty years. It was magnificent.

This weekend was flat out. Friday night I had dinner with friends at Vue de Monde – actually Cafe Vue – because they have a cocktail night where uber-chef Shannon Bennett invents five cocktails and then five tasty plates of food to accompany them. Totally delicious. Sorry, no photos, didn’t even think of it. I will make the ultimate sacrifice and go back again armed with my camera.

Saturday was Grand Final day, so my dad came over to watch the game and there was much cheering and yelling. It was an amazing game and an even more amazing win. I have already watched the replay once, and I plan to do that a few more times.

Saturday night a couple of friends came over for dinner, which was lovely. We ate and drank and talked lots; the perfect way to spend an evening.

Sunday the boy and I decided to go for a drive, we went to Hanging Rock as neither of us had been there before. It was just gorgeous but I must be getting old because I forgot to take my camera with me again.

Here’s a photo of a golden pheasant to make up for it.

Here’s the Ruffed Lemur, posing beautifully for a photo:

And here’s one of the orangutans, playing with something.  Sorry about the reflection, he’s behind glass but it was really open and quite glary.

And a meerkat! They are so adorable. And tiny.

Continuing on from my visit to the zoo last week… here are the baby elephants.  Seriously cute!

And the new baby boy, born just 10 days ago, who is positively adorable.

And dad Bong Su, who is not overly impressed with all the attention the new baby is getting.

Apologies to Graeme Base for bastardising his book title.

I spent today at the Zoo. I was there for a workshop, which I had organised, but I built in time for everyone to go and look at the animals (mostly because I wanted to see them). And here are a few I managed to capture.

This is one of the baby tigers – he’s about nine months old.

And here’s another of the babies, having a wonderful time attacking a stick.

This one was a bit hungry and not keen to share.

Since I took 284 photos, I might break them up into a few posts.

Does it get any cuter?

Animals, blogging just for the sake of it